The next issue of our news letter eMIRG will be sent out soon. You can already read the article about Michael Campbell on this website. Michael is an Australian fire fighter who came to visit one of our Calais training sessions.

Australia and Europe are not so very different

The largest port in Australia is in Melbourne, where large numbers of containers are transhipped and liquid (hazardous) substances, wheat, and cement are stored. Some of the largest cruise ships, with thousands of passengers on board, regularly tie up closer to the city and over the coming years the port will be undergoing a major expansion amounting to AUD$1.6 billion. This means more ship movements and more tourists visiting the city, and therefore means increased risks for which the fire brigade shall have to prepare. ‘And that’s not the only thing’, says Acting Senior Station Officer Michael Campbell from the Melbourne Metropolitan Fire Brigade. ‘The area we cover has expanded considerably. Initially we were responsible for the ships at berth, however, Port 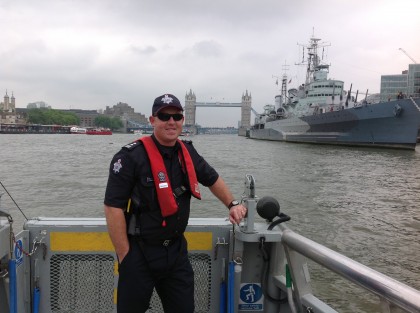 Phillip Bay, with an area of more than 100,000 hectares, has been added to our remit and now includes those vessels waiting to enter port at anchor within Port Phillip Bay. Our tasks of course focus on fire fighting, rescue on board and hazardous incidents but we are also responsible for minimising environmental damage. Our region is vulnerable because of its significant cultural heritage and areas of natural beauty. As a fire brigade, we have to be well prepared for all of the risks associated with port installations and shipping.’

Learn how to get on board
Those preparations are approached seriously and are the precise reason why Michael attended a simulator training course held in Calais by the MIRG-EU team from Zeeland. ‘We did draw up our own manuals and have set up training courses for dealing with maritime incidents but in the UK they’ve already gained 20 years’ experience and so there are more brigades in Europe that are involved in this. MIRG-EU is at the beginning of the process and I want to learn from it. I specifically want to look at how people and their equipment are taken on board. We currently take people to the incident by boat but in the future we want to deploy helicopters. An interesting question for me is also: how to get emergency workers and all of their equipment on board a cruise ship when three thousand passengers have to be evacuated at the same time? In addition to this, my focus is also on the strategic and tactical decisions that are taken when a maritime incident occurs. What struck me during the training in Calais was that the fundamental principles used in Europe are similar to those we use in Australia. There are of course differences but the way we work is generally the same.’

Touring Europe
Michael is not just looking at the operations of the MIRG-EU. In July he will also be visiting the London Fire Brigade, the Rotterdam-Rijnmond Safety Region and the Port of Rotterdam. A visit to colleagues in Italy is also planned and, if time permits, Michael will conclude his tour with a visit to Gothenburg in Sweden. “It will then be time for me to write up my findings, present them back home and convert them into firm recommendations for our interoperability as emergency service organisations within the marine environment. Melbourne Fire Brigade is committed to building capacity and capability of its marine response in line with its statutory responsibility. The emergency services foundation scholarship which was awarded to Michael, allows the opportunity for emergency service organisations to investigate global best practice in regards to emergency response, instruction and training within the Melbourne Metroplitan fire brigades marine  training department.  We are currently building a large training centre where our people will be able to practice dealing with all kinds of emergencies in a very realistic way. There will be a large underground room where, for example, we can simulate a fire in a multi-storey car park and we will have a large ship structure with 5 hot fire scenarios throughout. The Australian Navy have even given us equipment like chairs, mooring lines and even an anchor in order for it to appear very realistic. It will also be surrounded by water. We can practice five different scenarios.’ Practicing on a simulator is one way but there’s nothing better than a real ship. ‘That’s why we’ve been in contact with ship owners and agents and have made agreements with them that when their ships are in our port we can go on board and practice. It’s a matter of one telephone call and then we can head out.’ Building these relationships with industry is vital.

Michael is positive about his European encounters. ‘In our country we are the only brigade that is involved intensively with this form of fire fighting. I’m therefore hoping that the contacts I’m now establishing will result in a global network in which we can exchange knowledge and expertise. Ocean-going ships do not restrict themselves to just one country, so why should the emergency services? The more we harmonise our approach the greater the trust we will gain worldwide.’