Today the four partners of the MIRG-EU project officially ended the three year Interreg IVA 2Seas project with a final conference in Vlissingen. The various presenters looked back on the results of the project, presented case studies from Iceland and Melbourne, Australia and looked into the future. It may be the end of the project, but it actually marks the start of the work of the MIRGs in the 2Seas area and preferably in the rest of Europe as well. 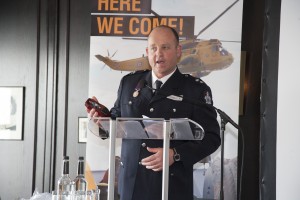 King’s Commissioner in Zeeland and chairman of the MIRG-EU monitoring committee wrapped up and summarised the day. ‘I am proud to say that the people of the MIRG-EU project have done a great job. Standard operational procedures have been developed, teams have been trained and fully equipped and they showed their excellent skills during the Large Scale Exercise on board DFDS Princess Seaways. I witnessed that exercise myself and was impressed by the way people worked together. A follow up project has been set up already in which we work with the use of drones in making risk assessments. We also look at possibilities to work with the Scandinavian MIRG teams. I can conclude that MIRG-EU can and will be of great value in combating on board incidents.’

Mr. Polman briefly summarised the contributions of the various speakers: ‘Carl Decaluwe, Governor of West Flanders said that we face considerable risks in the 2Seas area, especially with cruise ships with large amounts of people on board. Cooperation in the EU in this field, is therefore valuable. Daan Schalck, CEO of the Port of Ghent stated that only a safe port can be economically successful. Michael Campbell from the Melbourne Fire Brigade showed us that world wide cooperation is both possible and valuable. And very importantly he reminded us that: if you think training costs a lot of money, wait for an incident! Leendert Muller, president of the International Salvage Union made clear that timely response is critical in combatting incidents successfully and that joint training of private, public and ship owners is necessary. He made a plea for national governments to make sure ports of refuge are available.’

The French partner from SDIS62 did a combined presentation with the Prefecture Maritime/French Marine. Polman: ‘Jean-Michel Chevalier, Charles-Henri Thouaille (Prefecture Maritime) and Laurent Moreau (SDIS62) showed that specific legal frameworks demand for specific action, but that that does not mean it stand in the way of collaboration. Dr. Florika Fink-Hooijer, the director for Strategy, Policy, and International Cooperation at the Directorate General for Humanitarian Aid and Civil Protection, shared high regard for the work of MIRG. She sees opportunities to incorporate MIRG into the EU Civil protection mechanism. The Voluntary Pool, which is to be set up in the near future, might be a good way to do so. Such a pool can be called upon in case of an emergency, in return it can count on financial support. It is important that we participate in this area. We hope our national government will help us participate on this European level. And I know from my own experience, that our national government does not only stimulates safety regions to work with other regions, but also cross border with other European countries.’

‘The world is smaller and smaller. We have to share expertise, we have to meet each other and we must trust each other to be able to learn from each other.’