On 18 June our Maritime Incident Response Groups from Kent (UK), Zeeland (NL), Ghent, Antwerp, Beveren (BE) Pas de Calais and the French Navy (FR) ran a successful exercise on board DFDS Seaways’ cruise ferry, Princess Seaways. In the exercise scenario the groups were confronted with fire on one of the ferry’s car decks. The exercise tested the ability of the four teams to develop a strategy to combat the fire, to actually tackle an onboard incident and to hand over the command to a relaying group. In addition to that, the groups tested their new equipment, specially made for  maritime incidents. After two years of training and exercise drills, the four teams are now ready to be called in for maritime incidents. 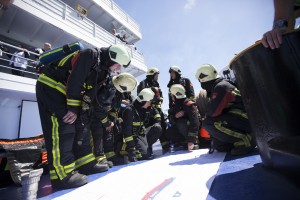 The firefighting teams brought their professional expertise onboard the vessel and used a ‘contain & maintain’ strategy to safeguard the vessel by containing the fire within as small a compartment as possible. This allows a vessel to either be brought back alongside, where additional resources to mount a sustained attack on the fire can be utilised, or provides the additional time that the ship’s crew might need in order to safely evacuate all of the passengers and crew.

The senior fire service officer on the vessel, the Operations Commander, directed the firefighting operations but also liaised very closely with the Master of the vessel. The Master remains in full command of the emergency,  to ensure that the firefighting actions do not have any adverse effect on the safety of the vessel. Eight men were winched from a helicopter on to the ship’s deck for assistance. DFDS Seaways, which conducts regular safety training and drills across all its ships and operations, took the opportunity to also test its own safety procedures during the event as well.

Four countries, one MIRG-EU
In the European Interreg IV A 2 Seas project MIRG-EU firefighting teams from Zeeland, Antwerp, Ghent, Beveren, Pas de Calais and Kent, supported by the Dutch Province of Zeeland, joint forces. Together they set up international teams that are specialized in fighting maritime incidents: MIRGs. As these MIRGs know how to combat on board fires and incidents with toxic cargos, casualties and evacuations at sea can be avoided. Next to that, fast action can avoid pollution of the natural environment. Once an incident is under control, the incident ship can be guided to a port. This way obstruction of other traffic is limited to a minimum.

In the two and a half years the project runs, MIRG members were selected, educated and trained. MIRGs from the four different countries work according to one training and operational program.  Next to that all MIRGs are equipped with compatible materials. This way the groups can relay one another if necessary.