It is 9h50 AM on 15 May when Henri Poortvliet’s pager beeps. Message: Priority three, exercise, report at fire station. Henri:  ‘We already were at the fire station where we were briefed in advance about safety measures and some other things. 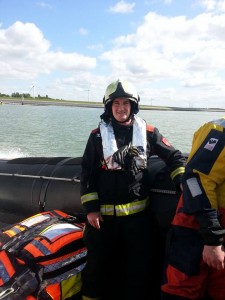 After the pager message the incident briefing started. We were informed about the incident, the ship, the kind of problems and transportation arrangements. The two MIRG teams were set up (a command team and a support team). They got ready to be brought to the incident, wearing protective clothes and with all the equipment packed in helicopter loading bags. Two mini vans dropped us off at a jetty at the border of the Western Scheldt. Here we entered the ‘Zeemanshoop’ from the KNRM (Royal Dutch Lifeboat Organisation) that took us to the incident ship. In the meantime the team with cooling equipment got on board a police vessel and transferred half way on to the Multratug 19 of salvage company Multraship, and went to the incident ship as well.

We arrived at the ‘Frans Naerebout’, the troubled ship. There was a fire in the thruster compartment and in the engine room. Part of the crew’s quarters were filled with smoke. We started immediately making a strike plan in cooperation with the ship’s crew. In the meantime the support team got ready for action. After en few minutes we had a clear view of the best way to fight the fire. We set up boundary cooling around the thruster compartment and the engine room. We inspected the surrounding aeras.

The engine room fire was extinguished by the on board firefighting system. We constantly monitored the thruster compartment temperature. We decided to bring foam into the compartment to extinguish the fire. The foam was provided from the Multratug 19. This strategy was successful, the ship was ready to be dredged to a save port.’

Henri considers the exercise very valuable. ‘It is a complete different experience, exercising with an incident on board a floating ship. This really completed our training. We could now practice the transport, what to bring into the loading bags. That is something you really have to consider thoroughly as you can’t turn around to pick up something you have forgotten. That is what makes this work so great: it demands improvising and making quick decisions.’